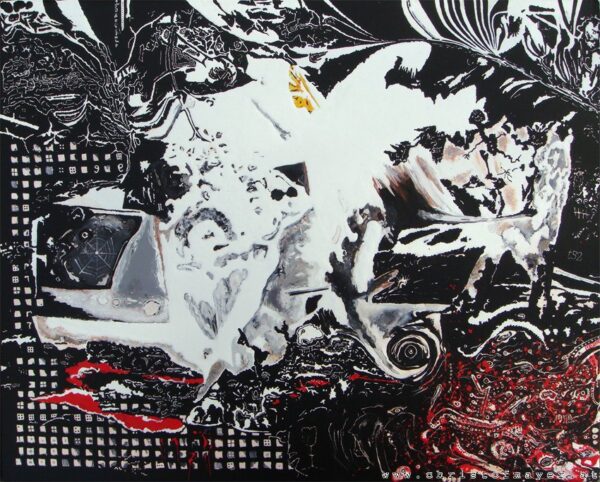 The Demons of the Cities

The midnight cities cower underfoot;
The demons trample through the urban graves;
Their skipper-beards, a sprout of smoke and soot,
Bristle like chins of Charons needing shaves.

Creeping on fog-shoes where the pavement drowses
And crawling forward slowly room by room,
Their shadows waver over waves of houses
And gobble street-lights in the black gulps of gloom.

Their knees are kneeling on the city towers,
Their feet make footstools of the city squares,
And where the rain strews down its bleakest flowers
Their stormy pipe of Pan rears up and blares.

Around their feet each city’s dark refrain
Is circling like a rondo of the waters.
An ode to death. Now faint, now shrill again,
The dirge ebbs into darkness till it falters.

The stream they stroll on is a snaky glow,
Its dim back speckled by the yellow glimmer
The lanterns — blanketed in the black-out — throw.
The melancholy reptile wallows.

Their weight falls heavy on a bridge’s railing
Each time their hands fall heavy into swarms
Of urban flesh, as if some faun were flailing
Across a slimy swamp his outstretched arms.

Now one stands up. He hangs a ghoul’s black mask
On the white moon. The leaden heavens spill
Down darkly from a heaven darker still,
Crushing the houses in a jet-black cask.

A snapping sound. A city’s backbone splits.
A roof cracks open, reddening its rent
With arson. Demons squat on it like cats
And ululate into the firmament.

A spawning mother bawls where midnight billows;
The steep crescendo of each labour pang
Arches her brawny pelvis from its pillows;
Around her the enormous devils throng.

She’s tossed yet anchored. Overhead, her bed’s
Whole ceiling shakes with howlings of the tortured.
Red furrow — redder; longer. Now the orchard
Brings forth the fruit. It rips her womb to shreds.

The devil’s necks are growing like giraffes’.
The baby has no head. The mother lugs
It with her till she faints; a devil laughs;
Her spine is tickled by cold thumbs of frogs.

Tossing their horns, the demons grow so tall
They gash the very sky for blood to plunder.
Through laps of cities roars their earthquake-thunder
While lightning sizzles where their hoofbeats fall.